The idea for the UCLA–Venice Family Clinic Emergency Food Partnership began when Administrative Vice Chancellor Michael Beck reached out to Dr. Wendelin Slusser, the associate vice provost for the Semel Healthy Campus Initiative Center at UCLA. He told her that there would be fewer students coming back to campus in the fall and asked if there were ways the UCLA Dining staff could apply their skills to help both UCLA and the Los Angeles community it has called home for the past 101 years. Slusser immediately thought about the Clinic, where she worked for almost 20 years and helped start its pediatric training program.

Since 1978, physicians from the David Geffen School of Medicine at UCLA, as well as medical students and premedical undergraduates, have volunteered at the Clinic. UCLA hospitals also donate radiology, laboratory, surgical, emergency and other clinical services.

“UCLA’s partnership with Venice Family Clinic really demonstrates how much UCLA can do for the broader community in ways that are so material and so immediate,” Slusser says. “Part of UCLA’s mission is service, and even though UCLA is also under great stress during the pandemic, we’re not forgetting other people.”

Slusser began to think about how UCLA’s resources and talent could help the families at the Clinic. She then called Elizabeth Benson Forer, the Clinic’s CEO and executive director, and told her: “We’ve got this first-class dining team. And wouldn’t that be amazing if we could have them deliver meals since you’ve got this great distribution system going for all your patients?” 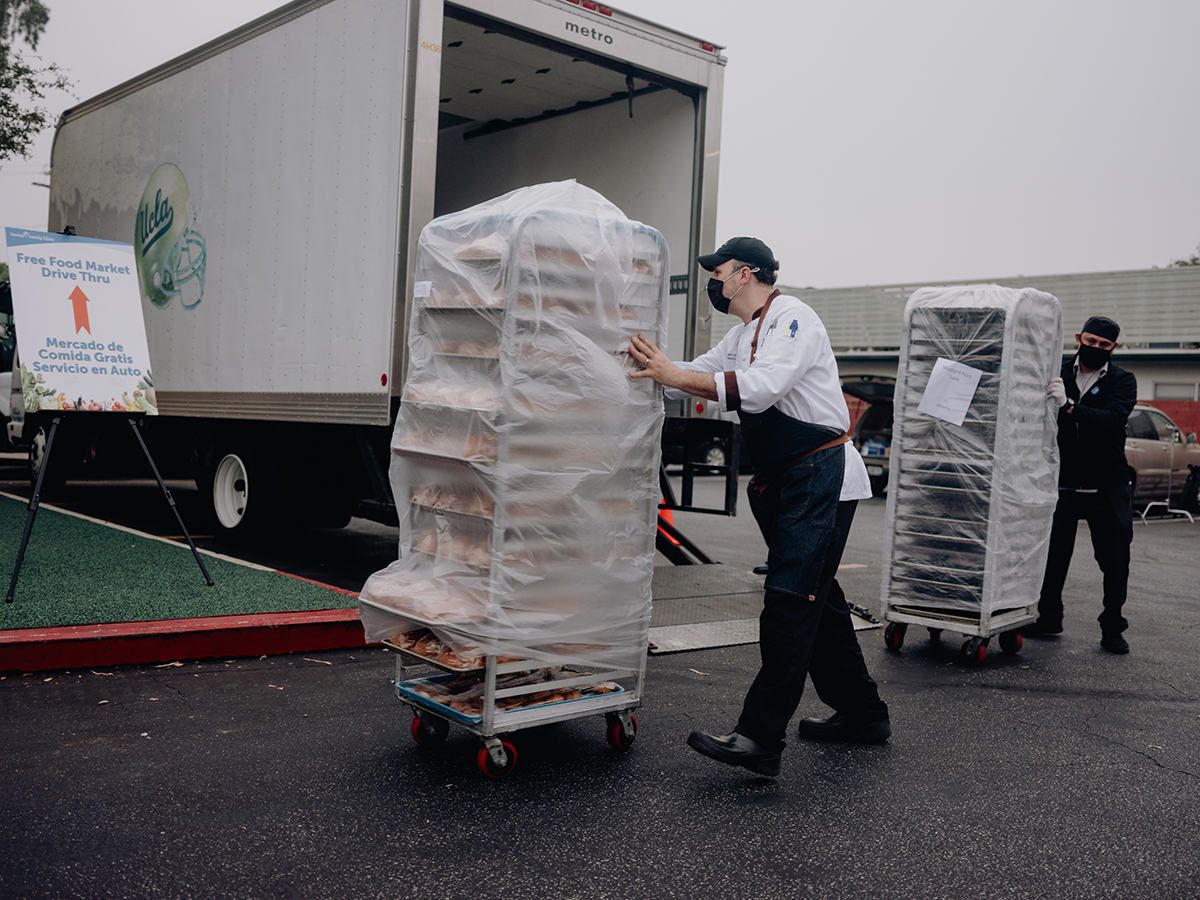 It turns out the stars were aligned: Forer had just spoken with an anonymous donor who was interested in helping to address food insecurity.

“The donor provided a really generous gift, so we could start the emergency food program,” Forer says. “I realized how fast we had to move. People are running out of money. And the next round of federal money isn’t here yet. People are hungry. They’re losing their jobs. They’re losing their housing. We’re hoping that by replacing the cost of food in their budgets, they can have some money to keep paying the rent. It’s getting really hard.”

“UCLA has been amazing,” Forer says. “They’re good at their logistics, and we’re good with our logistics, so the teams have come together with big smiles. We work well together.”

UCLA Chancellor Gene Block commended the collaboration for its ingenuity.

“I’m exceedingly proud of this partnership and the ways in which UCLA staff has stepped up to meet the challenges of this moment,” Chancellor Block says. “Not only does it highlight our commitment to serving the community, but it also shows the resourcefulness and creativity of Bruins.”