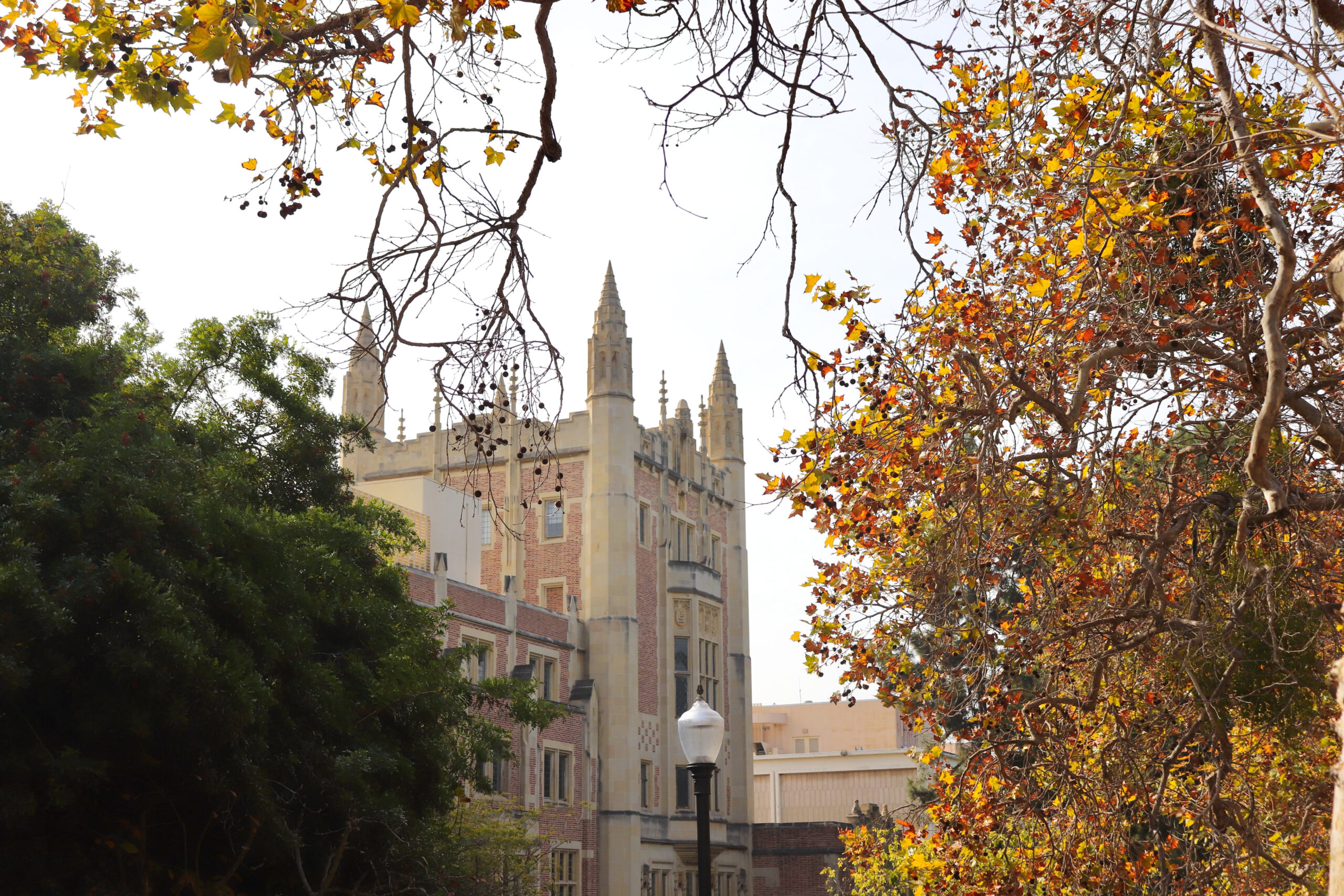 With the days getting shorter and the weather turning cooler, it is clear that fall is in full swing. In my Fall 2022 Update, I look at how Bruins are responding to recent unrest in Iran, discuss the importance of voting in the upcoming election, highlight our commitment to meeting students’ basic needs, and share information about a timely interdisciplinary Initiative to Study Hate.

01. Bruins Respond to Unrest in Iran

02. Your Vote is Your Power

04. The Launch of the Initiative to Study Hate

Bruins Respond to Unrest in Iran 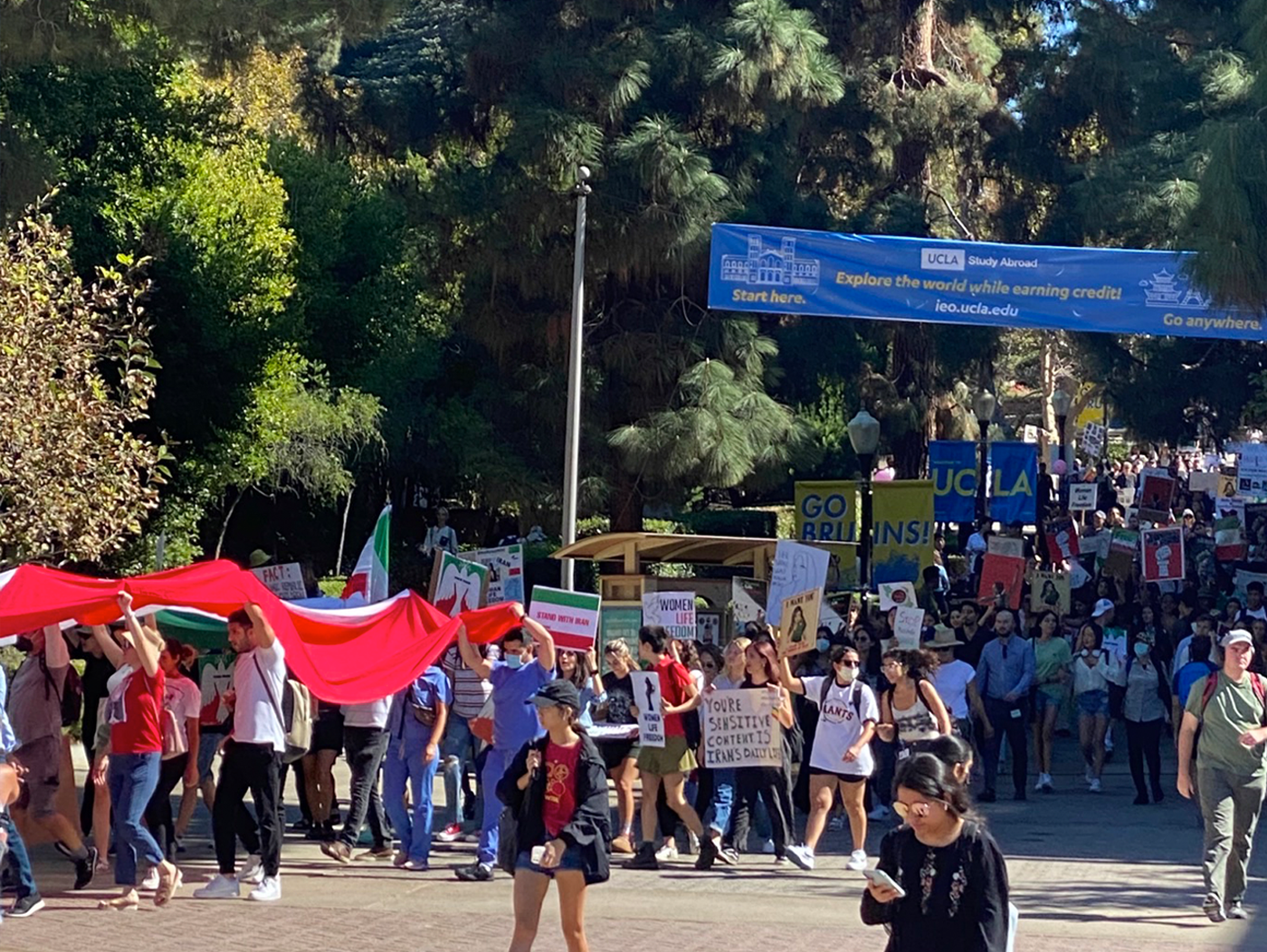 Since the death of 22-year-old Mahsa Amini in September, Iranians have risen up in protest of the country’s treatment of women. The demonstrations have captured the world’s attention — and been met with a violent response from Iranian authorities.

Amini’s death and the Iranian government’s reaction to the unrest are gravely concerning to me and to many across UCLA. Recent attacks on student protesters at Sharif University of Technology in Tehran — one of our peer institutions of higher learning — are particularly devastating. We mourn for those who have been lost, and express our hopes for the health and safety of those still in harm’s way. UCLA stands firm in its commitment to women’s rights, to justice and equality, and to democratic norms of free, open and safe expression of dissent. We stand unequivocally against violence and repression.

In the past several weeks, Bruins have taken action in multiple ways to show support and solidarity. UCLA students — including the Iranian Student Group and Iranian Graduate and Professional Association — have played a lead role in bringing broader visibility to women’s rights issues in Iran, educating communities around them and generating support for those who have been affected by the current unrest. Their efforts have taken the form of vigils, rallies on campus, reflection spaces hosted in partnership with UCLA’s RISE Center and more.

For their part, UCLA scholars — in the Iranian Studies Program, Center for Near Eastern Studies, Department of Near Eastern Languages and Cultures, Center for Middle East Development and Pourdavoud Center for the Study of the Iranian World — are helping our campus and the world make sense of the turmoil. One upcoming virtual panel discussion, on Oct. 27, will review the events of the past month in relation to previous protest movements, analyze protesters’ demands and examine the Iranian government’s response. A second panel event on Oct. 30 and conducted in Persian, will look at whether the protests represent a burgeoning revolution; how the movement is incorporating ethnic, gender and class diversity; and how the uprising might shape the future of Iran.

The events in Iran have a particular relevance for UCLA’s extended community. About 400,000 Iranian-born immigrants live in the United States, and more than a third of them make the Los Angeles metropolitan region their home. Westwood in particular is a thriving hub for Iranians and Iranian-Americans, with a stretch of Westwood Boulevard south of Wilshire known affectionately as Tehrangeles. I am grateful that Bruins are playing a part in responding to a global event that has implications for those both far from our campus and those within our own community.

Your Vote is Your Power 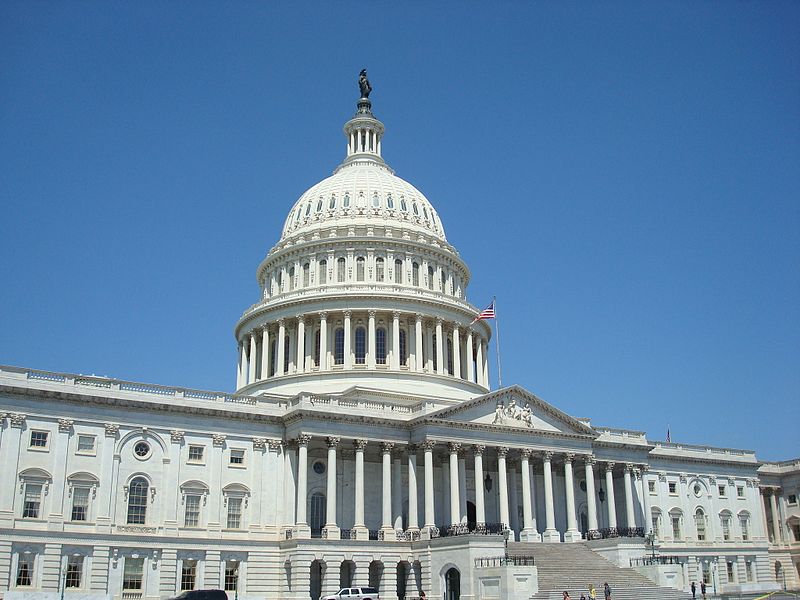 The November election will be vitally important for our nation, state and region. The election will determine the balance of political power in Washington, D.C.; which ballot propositions will shape California policy in the years ahead; who will be Los Angeles’ next mayor; and who will represent UCLA on the Los Angeles City Council and Los Angeles County Board of Supervisors.

UCLA’s public service mission asks that we educate our community and the broader public about candidates up for election and issues on the ballot. In September, UCLA hosted a forum featuring L.A. City Council District 5 and County Board of Supervisors District 3 candidates at the Hammer Museum in Westwood. Additionally, our scholars have been providing insight into the issues on Los Angeles voters’ minds.

UCLA’s commitment to public service also means we must make it easy for Bruins to vote and take an active role in shaping their communities. The University of California has non-partisan voting resources, including information on how to register, available to students, faculty, staff, alumni and friends. Our student-driven BruinsVote initiative has pulled together additional information and resources specific to LA County.

Starting Saturday, November 5, and continuing through Election Day on Tuesday, November 8, UCLA will host in-person vote centers at Ackerman Student Union, DeNeve Commons and the Hammer Museum. In addition, the Vote-by-Mail drop box for Los Angeles County ballots at the parking and information kiosk on Westwood Plaza is open now through 8 p.m. on election day.

UCLA helps develop civic-minded leaders who are engaged in the issues impacting their communities and the world. I am proud that UCLA’s voting rate for eligible students is above the national average. I want to build on that success and have even more of our students vote this year.

Just as important, I want our staff and faculty to have the resources they need to participate in our democratic process. To those who work at UCLA: Remember that California law allows employees to take up to two hours of paid time off to vote at the beginning or end of shifts, if needed. Employees should make necessary arrangements with supervisors in advance.

For this election, UCLA is excited to partner with a new voter mobilization platform designed by UCLA researchers called GrowVotes. The platform enables Bruins to declare their intention to vote and then use their phone to organize their friends and family to do the same. Forming a virtual community in this way allows people to share enthusiasm for engaging in the democratic process and, research suggests, should help boost turnout.

Voting is a precious right. I hope we all exercise that right this November. 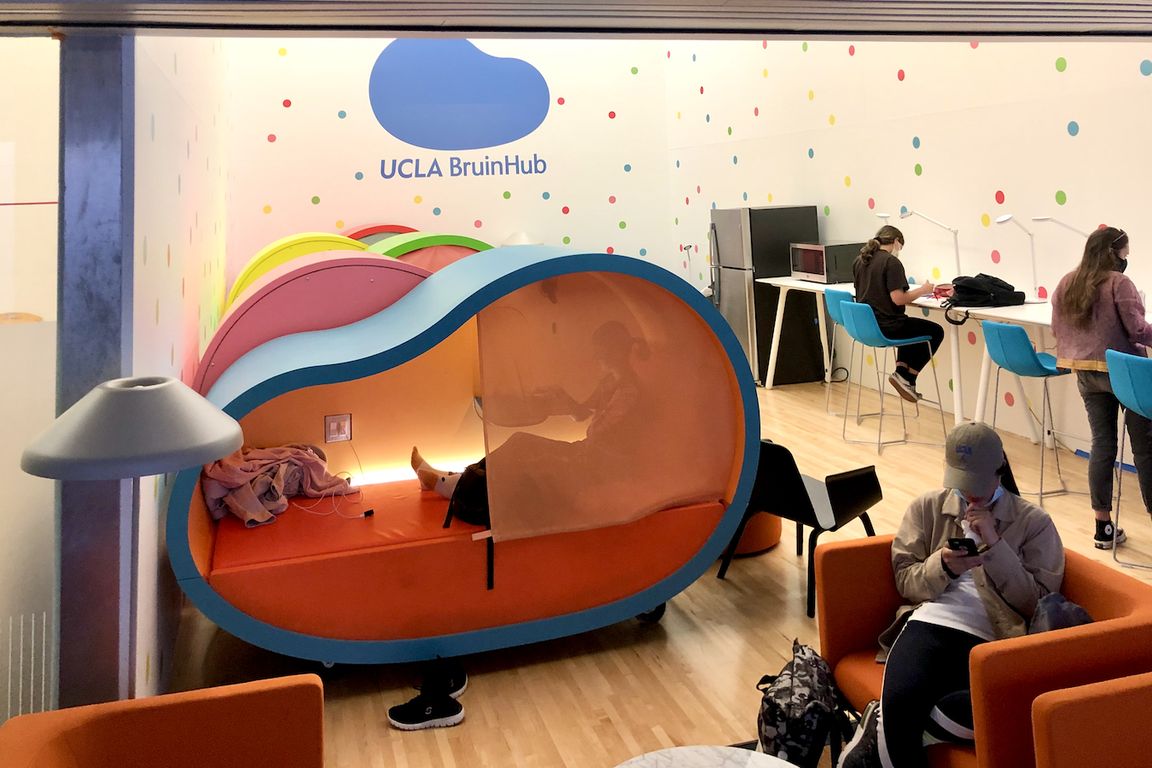 One of my most important goals as chancellor is to make UCLA a place where all students — no matter their background or means — can take advantage of the many opportunities our campus has to offer.

At the moment, there are barriers to this. Students simply cannot focus on academics or extracurriculars if they are experiencing routine hunger, struggling with their mental health, or worrying where they will sleep at night . We take great pride in welcoming all kinds of students and must create a campus community where each one can achieve their full potential.

This summer, we announced a donor-funded effort to bring together many of our services in a new center, located in the UCLA Strathmore Building. We hope that this centralized location will increase visibility of and access to available resources. The new center builds on other recent efforts to support students in need: Last fall, we launched The BruinHub, a first-of-its-kind 24/7 space for commuter and housing-insecure students to study, wait out traffic, store belongings and sleep. It’s proven to be a popular resting spot for many students on campus. UCLA also is piloting the Bruin Success Scholars program, which provides 1,300 students with the greatest financial need an additional $2,000 toward tuition each year for four years, as well as a free laptop.

On November 3, UCLA will host a basic needs resource fair at our First Thursdays block party in Westwood Village. Join us to learn more and get involved. Making the essentials more widely accessible is critical if UCLA is to continue being an engine of socioeconomic transformation.

The Launch of the Initiative to Study Hate 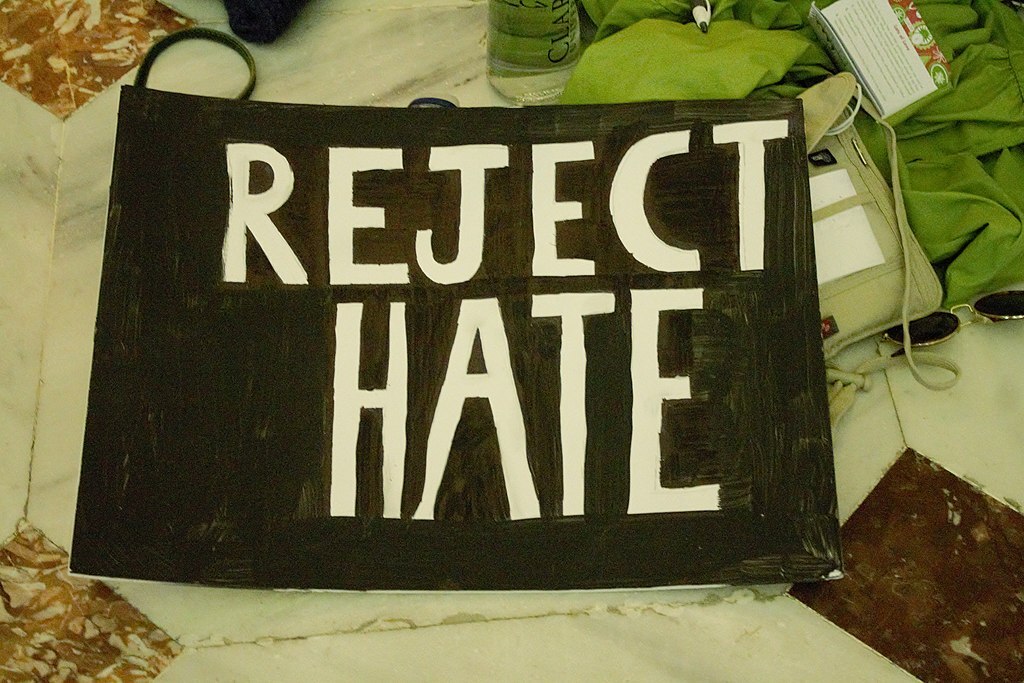 Tragically and frustratingly, hate directed at particular people or groups is on the rise in the U.S. According to data published by the Center for the Study of Hate and Extremism, U.S. hate crime was up over 20% in 2021 and another 4.7% in the first half of 2022. Hate crimes against Asian, Black, and Jewish people have seen spikes In 2021, Los Angeles reported the most hate crimes of any U.S. city this century.

UCLA is putting its academic resources towards overcoming this critical and growing problem. With the aim of building a more just and less polarized society, UCLA scholars from more than 18 disciplines are embarking on a three-year pilot program, the Initiative to Study Hate, which seeks to understand as well as combat group hate in all its forms.

A $3 million gift from an anonymous donor has launched more than 20 research projects, covering topics including the mechanisms in the brain that lead to dehumanization, social media hate speech and its effects on children, hatred towards people experiencing homelessness, misinformation as an agent of hate in international political discourse, discrimination experienced by individuals with disabilities and more.

While this specific initiative is new, UCLA has had a longstanding commitment to creating a more humane world. Whether through 50 years of social impact work from scholars in UCLA’s Institute of American Cultures or ongoing efforts from the Bedari Kindness Institute, Center for Critical Internet Inquiry and Center for the Study of Women, we have deepened understanding of the struggles faced by different populations — and endeavored to develop solutions.

UCLA history professor David Myers, who serves as director of the Initiative to Study Hate, has posed the question of “whether or not group-based hatred is an integral feature of individual human psychology or an inescapable organizing principle of society.” Our scholars will seek the answer over the next three years and beyond.

But I would add a second question, too: Whatever the genesis of a form of hatred, can we facilitate its end? I am hopeful that this new initiative will weaken hate’s grip on our speech, our actions, our power structures and, ultimately, our future.