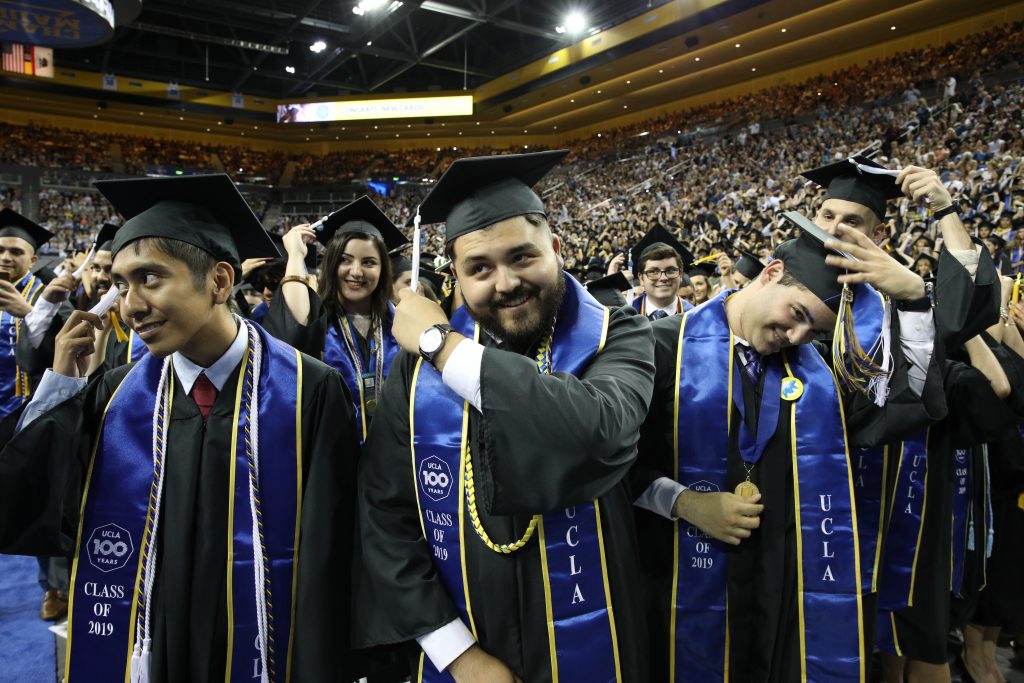 Amid cheers and tears of happiness, the centennial class of UCLA celebrated both its graduation and the 100 years of UCLA’s existence at today’s commencement ceremonies, embracing the message that extraordinary changes don’t happen inevitably, but because people like this year’s graduates fight for it.

About 6,000 seniors were expected at the UCLA College commencement ceremonies in Pauley Pavilion at 2 p.m. and 7 p.m., joined by more than 20,000 friends, family members and guests. At dozens of ceremonies across campus this graduation season, UCLA awarded roughly 8,400 undergraduate degrees and 5,000 graduate degrees, including just over 600 Ph.D.s.

This year’s UCLA College graduates include students like Haya Kaliounji, a Syrian immigrant whose organization, Rise Again, has helped more than 40 Syrian amputees get prosthetic limbs, and Helen and Rachel Lee, first-generation college students and twins who are working with state legislators to repeal the sales tax on menstrual products.

In its first 100 years, UCLA has become the most applied-to university in the country and is often ranked as the nation’s No. 1 public university. Bruins have earned 13 Nobel Prizes and three Pulitzers. Roughly a third of UCLA undergraduates are first-generation college students, and a similar number come from low-income families.

For the first time, the commencement program included an acknowledgment of the Tongva people as the original inhabitants of the Los Angeles basin. In his address, UCLA Chancellor Gene Block reminded the audience that students led or aided many positive changes — like the creation of UCLA’s prestigious ethnic studies centers, or programs to support students who are veterans, undocumented, transfers, parents or foster youth.

While UCLA can still improve, it has made dramatic changes for the better since 1919, Block said.

“We better embody the aspirations of all our members, and we are a lot more diverse — we represent a much more diverse and interesting family than we did when we started,” Block said. “All that has changed on this campus hasn’t changed by accident. It changed because of students, faculty and staff, alumni and others like you, who said ‘UCLA can do better.’”