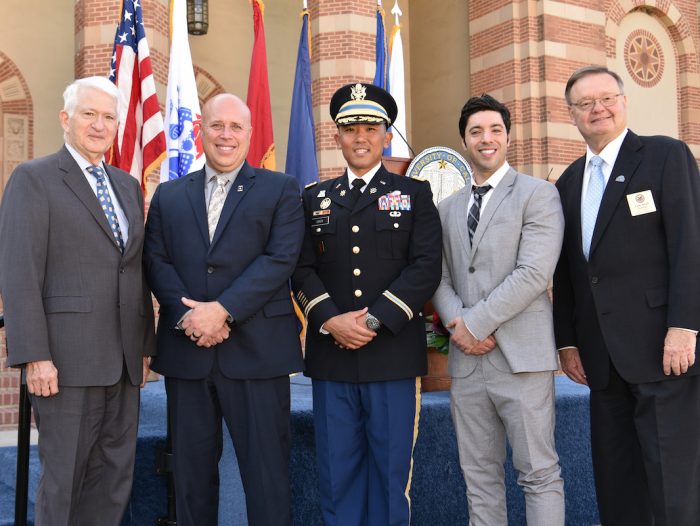 As Christopher Jones looked out into a crowd of veterans, military peers, family members and the public gathered at UCLA, he reflected on his life’s ethos, one definitively shaped by his service in the U.S. Navy.

“So, what does Veterans Day mean to me?” he asked, before pausing a moment. “It means honoring those who were brave enough to go before me, who were willing to fail, who were willing to learn and who were willing to pass those lessons on to me…” After spending four years doing that in the Navy, Jones has shifted arenas and is now trying to improve the world by pursuing his doctoral degree in chemistry at UCLA.

Jones spoke at this morning’s Veterans Day ceremony on Wilson Plaza. The annual ceremony, which took place during UCLA’s Centennial year, was attended by dozens of people paying their respects to veterans for their service. In addition to recognizing veterans, the morning was also an opportunity to honor the unique partnership that has been formed between UCLA and the veteran community over nearly a century — and the drive of both to better each other and the world in the name of public service.

“Stories in the news, particularly those from dangerous and remote places, constantly remind us of how much we rely on our military to keep us safe,” UCLA Chancellor Gene Block said. “It’s very easy to take this for granted in our everyday lives, but this highly trained group of exceptional men and women with highly developed skills and the ability to carry out sophisticated missions certainly deserves our recognition.

“Your selfless dedication cannot be overstated,” Block continued. “For all of this, we commend you, and celebrate you, and are grateful to you and your families.”